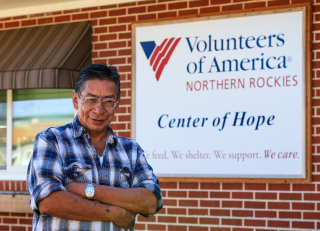 Today he is clean and sober. But for the past 35 years you might not have wanted to meet him. Maybe just released from the Fremont County Crisis Center, once called the ‘drunk tank,’ or jail, and out looking for his next shot of booze, he was likely stumbling and mumbling ‘you got a shot?’

Lionel spent a lot of time in the ‘drunk tank.’ It was a revolving door. In and out. Drunk on the way in; sober on the way out. But never sober for very long. Lionel knew the ‘drunk tank’ well. His friends and family were often with him there, drunk, too.

One time Lionel noticed the ‘drunk tank’ was different. He was offered the chance for real treatment. Did he want to stop drinking? Did he want something more from life? There was finally an offer of help if he did.

“I was in the jail cell and I decided to turn my life over to the Creator. There was hope,” he said.

And, indeed, since Volunteers of America's overhaul of the crisis center, a new program was in place, one offering treatment with trained professionals to help. And a new name: Center of Hope.

“That’s what it was, too {a Center of Hope}” Lionel said. “I found people to talk to. To help me get on a path of sobriety.”

“The Center of Hope became much more than a flop house or a detox center,” Lionel said.

“The old in and out was over,” he smiled. “I used to put so many roadblocks in my own way. I’ve learned not to fall under them, but to go over them.”

It wasn’t easy. Since he was 15 years old he had been drinking. He functioned sometimes. He even got sober for a bit, once.

“I knew how to get a spot job so I could get enough money to get drunk again,” he said. ‘I told myself that was at least better than panhandling.”

But he knew it really wasn’t better since the result would be the same. He’d get drunk.

When he entered the VOA treatment program, relying on the Center of Hope and the Life House — the Sheridan men’s inpatient treatment center — he found a new family.

“Now I have a sober family. Sobriety gives you strength. I don’t even keep track of how long I’ve been sober because the day that matters is today when I am sober. I want to keep that.”

Lionel discovered some amazing results came from the consequence of being sober. He has a job. He has his own apartment and he has a car. Soon he’ll get his driver’s license and give up the bicycle he calls his “War Pony,” that he’s pedaled 1,500 miles to and from work in the past few years.

He has other goals. He’d like to help others get on the sober path and learn what he’s learned.

“I am human like anybody else. I am part of life. The Creator gave life to enjoy, so enjoy it. I know who I am,” he smiles.

He believes if you look at him you’ll see a good man. He’ll meet you on sober ground where he says, “I’m busy living.”