Translation from kindergartner’s ‘Mne For hmlis Pepl’ is Money for Homeless People and, in any language, it states a great cause.

Thor and Trevor are kindergarteners at Meadowlark Elementary School in Sheridan whose mom explained what a homeless person is. They weren’t just shocked and surprised. They were motivated. These two kids, driven by their huge hearts, began collecting money to help homeless people.

No one should have to live hungry and on the street, they believed. Their belief became action. Soon they raised $418 in nickels and quarters, dimes and dollars. They trusted Volunteers of America with every penny. We don’t take that faith in our ability to help those in need lightly.

Thor and Trevor gave because their heart told them that no one should have to sleep on the streets, and they could do something. If everyone followed their heart the way these two kids did, giving everything they could give, imagine what could be accomplished, what a better place we could make for everyone.

On behalf of the 10,000 lives served, we are grateful for the support and trust bestowed on us by Thor and Trevor and all of you. 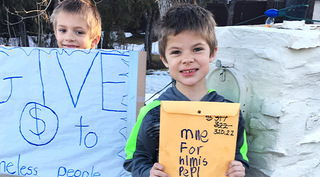